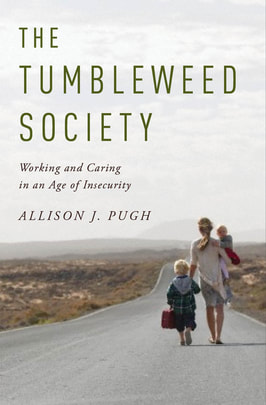 Published in May 2015 by Oxford University Press


Click here for a November 2017 keynote, "Insecure Work, Dignity and the Moral Wall," on the 20th anniversary of the Shepherd interdisciplinary program on poverty and human capability, Washington and Lee University.

We live in a tumbleweed society, where job insecurity is rampant and widely seen as inevitable. Companies are transforming the way they organize work. While new working conditions offer gains for some workers, others lose out. Many have pointed out what these changes mean at work. Yet why would they affect us only in the workplace? The Tumbleweed Society examines the broader impacts of job precariousness on our approach to work, our notions of what counts as honorable behavior, and our relations with the people we love.

The book looks at the ways we navigate questions of obligation and flexibility at work and at home in a society where insecurity has become the norm. Drawing on 80 in-depth interviews with three groups of parents who vary in their experiences of job insecurity and their relative advantage, we see how women and men are adapting to the new culture of insecurity and the effect of these adaptations on our willingness to commit, to care, to shoulder the burdens of other people's need.

Faced with perpetual insecurity both at work and at home, many people construct stronger walls between the two, expecting little or nothing from their jobs and placing nearly all of their expectations for fulfilling connections on their intimate relationships.  But this trend often has the effect of making their intimate lives even more fraught, reproducing the very insecurity they seek to check.  Job insecurity shapes how we talk about obligations, how we interpret them as commitments we will or will not take on, and how we conceive of what we owe each other -- indeed, how we are able to weave the fabric of our connected lives.

Media coverage of The Tumbleweed Society:
From journal reviews:

"Pugh has provided a gripping...portrayal of the ways the realities of work today affect our emotional lives and our family commitments. The book is only more relevant now that we are in the Trump era, where we are engaged in debates every day about who owes whom what, what we can expect of U.S. companies and of each other, and how social solidarity can be supported in the face of economic insecurity. The Tumbleweed Society foregrounds the intimate—the work and family lives of women and men navigating this landscape—but Pugh’s thoughtful analysis connects their stories and discourse to these broader concerns...This is an important analysis of insecurity today... Instructors can also use the book to illustrate what thoughtful interview analysis looks like. I was inspired by Pugh’s interviews and what she helps us see from a close reading of those exchanges."  Erin Kelly, MIT, in Contemporary Sociology.

"Ambitious...compelling...Those who care deeply about the massive implications of growing job insecurity and its influence on social relationships will find this a timely read." Gender & Society
​
"In the face of this rising insecurity, both Cooper and Pugh make a strong argument for the invisible emotional labor we all perform as we struggle to adapt to the conditions of our neoliberal state and laissez-faire economy. And both books make compelling cases that our emotional labor makes less visible the inequality and insecurity that have come to characterize the early twenty- first century."  New Labor Forum (joint review with Marianne Cooper's Cut Adrift).

"Pugh successfully weaves together short quotes and stories, creating an intimate connection between the reader and her participants, and since she has 80 interviews, there is rich variation. She elicits nuanced and insightful stories from her respondents...One of the remarkable strengths of the book lies in Pugh’s ability to consider a complex set of interlinking characteristics of her interviewees and generalize from them...Tumbleweed Society is a welcome and valuable contribution to the sociological debate about precarity because it questions what we know about the lived experience of precarity at this important historical moment."  Social Service Review

"Allison Pugh’s new book, The Tumbleweed Society: Working and Caring in an Age of Insecurity, based on intensive interviews with 80 mothers and fathers in different occupations, provides some important insights into the ways people react when their faith in hard work and individual responsibility runs up against the realities of work instability. Many of the people she interviewed had responded to the new “on demand” economy by adopting a “one-way honor system,” holding themselves (and other workers) to a strong work ethic and sense of duty but not expecting the same from employers. Only a few of her subjects expected reciprocal obligations from their employers. Significantly, these were mostly firefighters, police, and public school teachers—government employees with experience of collective bargaining. Among the others, some blamed themselves for their insecurity, some rose to heroic levels of helping those who were even more needy, and some redirected their disappointment and sense of betrayal away from employers onto others. Pugh’s account focuses on men who became embittered at their wives or ex-wives (often after driving them away), but the dynamics she describes illuminate some of the anger we see against immigrants, blacks, and welfare recipients among Trump and Tea Party supporters. While her survey is hardly representative, it does show us how people are struggling to rework their notions of obligations and ethics in an insecure world."  Stephanie Coontz, "Can the Working Family Work in America?" in American Prospect.

"Sociologist Pugh tries to connect the "two whirlwinds" of job insecurity and marital insecurity. She interviewed 88 parents of teenagers, mostly women, representing highly educated job changers, moderately educated job losers, and the moderately educated stably employed. Those at the top have the privilege of choice, riding the fluid economy for better opportunities. At the same time, they build a "moral wall" of stability around their marriages." Choice magazine (paywall).

Other coverage:
​
"Sociologist Allison Pugh enters this social-science morality debate with a pretty strong moral sense of her own, but with a substantially more complex and insightful approach to both social science and morality – and also to the 80 actually existing people she interviewed...One of the joys of the book is how Pugh creates richly detailed individual portraits of both the independent and the duty-bound, showing their resilient ingenuity in coping with the constantly unsettling turmoil of their work lives, but also adopting belief systems and life strategies that reproduce and support a neoliberal system they expect to betray and abandon them.   There is no moral fecklessness here, just debilitatingly low expectations of the social support and basic economic security any decent society would provide...Pugh convincingly argues that their individual ingenuity in making the best of bad situations, often with heroic efforts, undermines both their own long-term efforts to survive and any possibility of effective collective action that could reverse the downward spiral of contingency, precarity, and insecurity rooted in the American workplace."  Jack Metztgar, "Human Tumbleweeds, Insecurity Culture, and the American Working Class" in Working Class Perspectives, a blog of Georgetown University's Kalmanovitz Initiative for Labor and the Working Poor.

"Pugh’s central object of study is how this cultural transformation changes the way we love other people. For example, it is challenging for working-class individuals to protect their private lives from the ravages of job insecurity, because the churn they face at work produces a similar type of churn at home. In such a precarious environment, love becomes quite difficult...In addition to “free lunch” romantic relationships, the new economy is also transforming the way we parent. For disadvantaged and advantaged workers alike, there is an increasing tendency to displace the experience of insecurity onto our children. The ensuing tendency is to imagine good parenting in terms of raising a flexible child. For less advantaged Americans this flexibility is generally seen as a means of protection—buffering a child from life’s inevitable calamities and preparing him or her to bounce back from them. For those with more advantage, flexibility is typically viewed through the lens of opportunity—gaining new experiences, new friends, and new chances to succeed. What often goes unnoticed, however, is that embedded in the “common sense” of raising a flexible child is a form of relational detachment: The ideal child, we imagine, is the one who can take an independent stance, the one who can go it alone to survive the precarious and brave new world...In these and innumerable other ways, the age of insecurity functions in our lives like a dry desert: Its form of work turns us into tumbleweeds who, without strong roots, are formed accordingly by the superficial winds of the moment—by the winds of “free lunch” romances, “flexible child” parenting, and the like."  Clay Cooke. "Love in an Age of Insecurity." Culture Briefing, New City Commons.