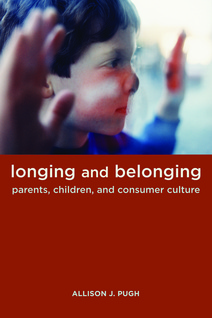 Available from University of California Press

Even as they see their wages go down and their buying power decrease, many parents are still putting their kids' material desires first. These parents struggle with how to handle children's consumer wants, which continue unabated despite the economic downturn. And, indeed, parents and other adults continue to spend billions of dollars on children every year. Why do children seem to desire so much, so often, so soon, and why do parents capitulate so readily? To determine what forces lie behind the onslaught of Nintendo Wiis and Bratz dolls, Allison J. Pugh spent three years observing and interviewing children and their families. In Longing and Belonging: Parents, Children, and Consumer Culture, Pugh teases out the complex factors that contribute to how we buy, from lunchroom conversations about Game Boys to the stark inequalities facing American children. Pugh finds that children's desires stem less from striving for status or falling victim to advertising than from their yearning to join the conversation at school or in the neighborhood. Most parents respond to children's need to belong by buying the particular goods and experiences that act as passports in children's social worlds, because they sympathize with their children's fear of being different from their peers. Even under financial constraints, families prioritize children "feeling normal". Pugh masterfully illuminates the surprising similarities in the fears and hopes of parents and children from vastly different social contexts, showing that while corporate marketing and materialism play a part in the commodification of childhood, at the heart of the matter is the desire to belong.

"But there were two books that made the biggest impact of all... The second is “Longing and Belonging” by Allison J. Pugh. In it, she named a number of things that I was struggling to identify myself, including the “dignity gantlet” that children must traverse when they don’t have the things and experiences that everyone else has, and the “symbolic deprivation” that affluent parents often engage in to signal their ambivalence about the spending that goes on all around them."  Ron Lieber, New York Times financial columnist and author of The Opposite of Spoiled in an interview here.

“This book is smart, subtle, detailed, theoretically sophisticated and endlessly compassionate. Simply stunning in its clarity and insight, I have to say I haven't read anything this compelling for a very long time.” Journal of Consumer Culture

“Whether your specialty is social psychology, family, social inequality, or the sociology of children, this is a book you will want on your bookshelf. You will find yourself assigning it to your students, both graduate and undergraduate, and recommending it to your friends and family. Longing and Belonging is both that compelling and that accessible; first-rate research and engaging prose make this a book that will be read and remembered.”  Contemporary Sociology

“Pugh's book... presents its own original analysis and provides an excellent and thought-provoking contribution to scholarship on contemporary childhood, parenting cultures, the work and meaning of caring in families, emotional life, and the consequences of diversity.”
American Journal of Sociology

“[R]eading this book didn’t feel like ‘work,’ and I felt inspired by Pugh's example, which demonstrates how good writing, strong narratives, and the intimate details of family life are not diversions from ‘real’ or serious scholarship, but an important way that sociological truths are discovered and communicated.” Canadian Journal of Sociology

“Sociologist Allison Pugh, in her brilliant study Longing and Belonging, succinctly frames [the] conundrum of contemporary child-rearing: ‘If consumer culture is the “enemy’ of good parenting, why do so many parents invite the enemy into their homes?”... Pugh [finds] compelling answers to that question.” Teachers College Record

“Many moms and dads find themselves navigating society's veritable obsession with the stuff of parenting—from the Bugaboo strollers to Bratz dolls to the brand-name college education and beyond. Longing and Belonging: Parents, Children, and Consumer Culture by Allison J. Pugh, from the University of California Press, examines this trend and offers some surprising reasons behind parents’ motivation to put their kids' material needs first.” Publishers Weekly

“Why does buying for children invite so much anxiety and concern? And, knowing what they do, why do parents capitulate? ... Pugh argues that consumer goods form the scrip children use to feel more similar to other children, which allows them to participate more equally with their peers in everyday child culture, to belong.” “Buying So Children Belong.” Science Magazine

Included in “Books of Note” in the American Sociological Association's Culture Newsletter.